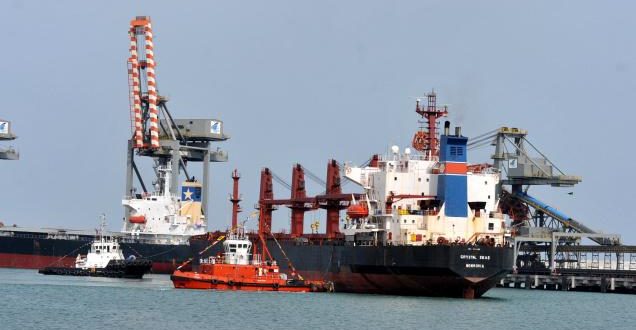 Mechanisation of ports and terminals

Ports and docks are the main traffic junctions, without which successful classic or modern transportation cannot be imagined. They are the connection and crossing spots of all sorts of transportation. In today’s modern world, in the application and development of various ways of integral, multimodal and combined transportation systems, port and dock (and storage) container terminals, modernly equipped, allow for very fast, high quality and economical transshipment of goods, based on the unique technological system „from door to door“. Port and dock container terminals have a very important role in the optimal contemporary development of sea and river shipping, those being main transporters of the international trades. Efficiency of rail, road and river traffic is also affected by equipment and development of port, dock and storage terminals.

This is why, there are very many large, medium and small cotainer terminals in the world. The choice of the port location, especially from the aspect of development and application of modern transportation technologies, containerisation, Ro-Ro, LASH and other systems, should be carefully observed and planned on several levels. This includes in the first place geographic, topographic, and maritime constituents, then economic potential of so-called gravitational economic background, then the present state of needs and possibilities of development of terrestrial infrastructure and modern high-speed roads: rails, road, river and air ways along with the development of modern terrestrial cumulative-distributional terminals and junctions, storages and stations. Marine interconnection with different ship lines and with as many world regions as possible is very important, together with quick adaptation of transforming classical lines into container and Ro-Ro. Developed trades, industry and banking in the very port allows for faster transformation of a classical port into a modern one. In addition, it is important that such a port is located relatively far from a competitor port or a potential new port.

An important element of a port container terminal are movable loading container bridges and container gantry cranes, that move along rails built into coastal surfaces, parallel with the length of the coast wall. The cranes have built-in pliers –clamps or so called spreaders, that automatically accept a container. Port container cranes can be as tall as 90m, and as heavy as 700t. They lean over the ship towards the sea side, and on the coast side over the rails, road vehicles or storages in the range of 20 to 45 m, depending on the size and capacity of the container crane. Beside the container cranes and container gantry cranes in port container terminals, an important role is seen in movable transportational means.

MECHANISATION OF PORTS AND TERMINALS

In order to be able to perform these and other tasks, the transportation sector needs to have appropriate technical resources and trained manpower, skilled in that line of work.

Required technical resources include primarily a varied vehicle fleet, by means of which transport can be performed. Besides, appropriate cranes need to be available, as well as different sorts of forklifts for work with pallets, portable carts, bars, mats, portable bridges, bulk wood, equipment for carrying furniture, scales, carts, pliers, hammers, and similar accessories.

Manpower doing the jobs in the transportation sector of the international shipping must be, not only reliable, but also trained, so that they could do everyday, often complicated tasks. Of course, such manpower must be well payed as well, in order to avoid fluctuations. Manpower that is changed often is not reliable, cannot be trained enough in work, and also, customers don’t appreciate having different workers do the work for them. In case the given task cannot be completed with the owned technical resources, the transportation sector will hire them (trucks, cranes, etc.) from another organisation, that is, it will give an instruction to another organisation to do the specified work. The same goes in case of a  lack of manpower for a specific sudden job, in which case the transportation sector will hire external work force. Loading, unloading and reloading of goods is done by  shipping companies, as ordered from a customer, given in the disposition. This may involve loading of goods from a storage into a road vehicle or a rail vagon, unloading from a road vehicle, rail vagon, ship or barge into the storage, as well as loading the goods from one vehicle into another (for instance, from a rail vagon into a truck, or the other way round).

Mechanized loading-unloading-reloading is less often used in shipping. This is because the forwarder manipulates different sorts of goods in different places, so the mechanization of works is less easily applied. The exception to that is appropriate mechanization in shipping storages, in case the conditions for palletization are met. If palletizated goods are storaged, the forwarder will manipulate such goods through forklifts that can be manual, electrical or motorized.

The advantage of mechanization is that it reduces the use of live work force and significantly incdreases productivity, thus making the work process cheaper. The drawback is that it is not suitable for goods of different sorts, and also requires a large turnover in order for the mechanisation to be lucrative.

Loading of goods into a vehicle (vagon, truck, ship) is done by certain regulations that are set for the specific traffic branch. Of course, the forwarder needs to know the regulations, especially since it is he who often conducts the loading, and if he doesn’t, it is his duty to monitor that process and protects the interests of the owner, i.e. his ordering party.

By reloading we mean loading of goods onto a vehicle, unloading the goods from the vehicle and direct reloading from one vehicle onto another. In a broader sense, reloading includes moving goods in storages because of preserving, packaging etc.  Intermodality enables saving on transportation system, where certain means of traffic are used in the most productive way. Techniques of moving cargo from one means of transportation onto another have been perfected, which made intermodal reloading easier. Beside automatization and mechanization of reloading, an important improvement in the context of intermodality is adapting the cargo to the reloading mechanisation. The change of the means of transportation within an intermodal transportation chain requires the cargo to be adapted to the mechanisation on transport terminals, as well as the cargo area of different vehicles. The main goal is to allow the door-to-door transportation not to be threatened by time losses in tranferring from one vehicle to another (reloading). (Stakić, Milan: 1985. str. 182).

Means of reloading of containers can be divided into two groups:

Each group has several types of carrying devices.

Movable shipping means have a theoretically infinite area of moving. Depending on the profile, containers can be loaded, reloaded, moved and unloaded. Practically those are forklifts and cranes, i.e. lifters and movers of containers of different dimensions and lifting abilities (lifting capacity: 5,10,20,30,35 and 40 tons). Those means have the following ways of approaching the container:

The main advantages achieved from the aspect of the operator by using the mechanization are:

The main advantages from the aspect of the user are:

Reloading exists ever since the emergence of transportation, thus, along with the search for solutions that will facilitate transportation, the options of perfecting reloading have also been developed.  The first reloading means were certainly arms and backs of people with no helping equipment. However, the word manual reload is wider than that, and includes reloading that involved helping devices run by human force. Such devices, that emerged long in the past, but are used today as well for reloading less heavy cargo, include simple lever, shovel, carts, pulleys, winches, hoists and hand cranes. Steam crane was desined shortly after the steam engine was invented, and electrical crane was designed shortly after the electromotor was invented. Since in the beginning, steam and electrical cranes were owned only by the richest and largest world ports, devices for lifting cargo that used steam or electricity were built into ships. Movable cranes (autocranes) with liquid fuels appeared a bit later. Thus, when we associate the improvement of reloading mechanization with modern times and the integration of transportation, by that we mean the additional impulse of increasing the process that lasts for centuries. Beside the increase in capacity, speed and efficiency of the work of reloading devices, reloading operations are being automated, which achieves bigger precision of loading, piling cargo,etc. At the same time, just as vehicles, reloading devices are ever more specialized in work with specific types of cargo.

In marine traffic, loading-unloading of goods from and into the ship is done mainly by specialized port companies, having particularly trained work force. However, loading-unloading, as well as piling goods in ship storages can be done in shipping companies as well, especially in inner sails and river trade. In both cases, the forwarder needs to know the technique of the work. Basic rule when piling goods in ship storages is that the heavy cargo should be put on the bottom of the ship, and light goods towards the top. Further, heavy goods should be piledd in the middle, and light goods towards the ship sides. Of course, these rules do not apply when shipping homogenous goods used to fill up the whole space (such as ores, grains,etc.). Piling cargo in shipping transport space requires full attention, because if it isn’t done carefully, it leads to damage to the cargo, or to irrational usage of ship space. Based on centuries long experience, so-called factors of piling have been determined for certain kinds of goods, that is, for certain types of packages. Those factors show how big a volume is needed for 1 ton of some goods in a certain package, so according to that, the ship space is planned. For transportation of dangerous goods in marine transportation, clauses of the International marine codex for dangerous goods (IMDG) apply. (W. Rotermund, Die Ladung – Band II (3. Auflage), Hamburg, 1949, pp. 269-304.)

Piling of goods in barges in river trade is similar to piling goods in marine boats. Loading also ought to be regularly distributed, and as for the control of appropriate piling and distributing, scale drafts are used.